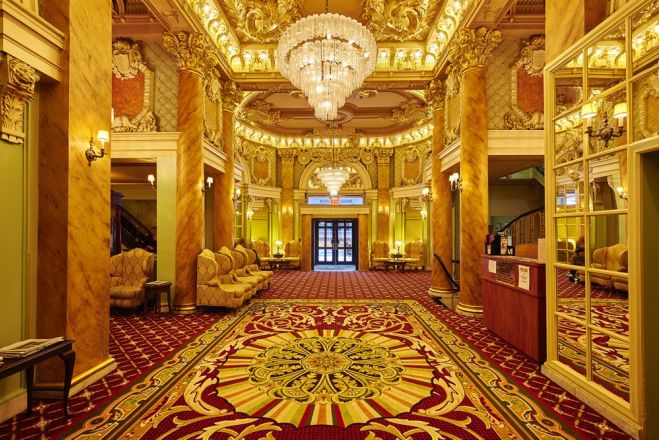 Make your day hotel stay enjoyable and comfortable by booking your day stay at The Hotel Wolcott.
Book now

We should cherish history. We should appreciate and learn from what the great minds before us thought. The Wolcott Hotel gives its guest an opportunity to do just that. Enjoy a daystay at the same hotel Mark Twain used to frequent and write letters from. The old-world atmosphere and architecture of The Wolcott Hotel highlights its rich history with a beautiful lobby, and a service that is hard to come by these days. Take a trip back in time by booking a daystay at the Wolcott Hotel with HotelsByDay today.

Koreatown – If you’re looking for something a little different to do during your daycation in New York, head a few minutes away to Koreatown for a densely packed area full of unique restaurants, karaoke bars, spas, and shopping. Grab a pastry and a cup of coffee at the trendy Koryodang Inc to start.

Herald Square Retail Space – On one of the busiest streets in Manhattan, a twelve story building stands tall in the heat of the sun. Macy's largest department store in the world offers 11 floors of retail space to consumers accompanied by a visitor center and various restaurants to stop by on your day cation! Another big player in the retail industry has also made their mark on the block as its biggest store to date. None other then David Beckham's favorite clothing line, H&M. The retired soccer superstar just joined H&M in an underwear marketing campaign just shortly after John Legend performed at the store grand opening. Stop by unannounced and indulge in some retail therapy on your day stay with HotelsByDay!!!

The High Line – If you’re visiting New York during a nice time of year, get some fresh air at the High Line. The elevated walkway is one of the best open spaces in the city, and is a pleasant spot to spend the afternoon outdoors. It’s well landscaped, great for photo ops, and has top-notch people watching all day long.

Business Center – The Wolcott Hotel supplies its guest with an on-site business center that includes fax and copy machines, and lets the guests be productive during their day.

Mark Twain – Just thought we’d let you know that the fact that Mark Twain used to stay at Wolcott Hotel really excites us. We hope you feel the same way.

Parking – There is no on site parking available, but there are plenty of off-site parking spots available in New York City. They do involve a fee however.